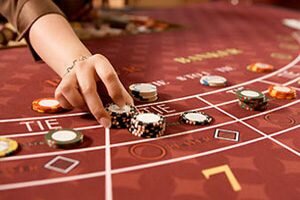 There are few casino games as old as baccarat, which is believed to have originated in the 15th century. Historically it was far more popular in Europe than it was in America, but once it was introduced into Las Vegas casinos in the 1950s its popularity grew in the US. It has since gone on to become one of the most widely played casino games there is.

Baccarat is often considered to be a high stakes game as it was traditionally played only by high rollers. That’s no longer the case though and you can play baccarat at casinos all around the world and online, for pretty much any stakes you want. We’ve listed the best places to play the game online in this guide, and we’ve also provided some information on the different variants of baccarat and explained the rules of the game.

There are several variants of baccarat, including some relatively new ones that have been developed by online casinos in recent years. Traditionally the three most popular versions of the game are Punto Banco (also known as North American baccarat), Chemin De Fer and Baccarat Banque. Although the basic principle is largely the same in each of these, there are a few differences.

The most notable difference is the fact that in Punto Banco there’s a fixed structure for when the players and the dealer are dealt cards, while in the other two versions mentioned players can make their own choices. This means there’s some element of skill in those, while Punto Banco is essentially a game of pure chance.

Punto Banco is the variant of baccarat played in most casinos around the world and also online. For this reason we’ll focus on this version for the purposes of this guide.

The rules of Punto Banco baccarat are really quite straightforward. Two hands are dealt in each round; one banker hand and one player hand. Only one player hand is dealt regardless of the number of players at the table as, unlike many other casino card games, the player hand does actually belong to a player as such. It’s really just a way of differentiating between the two hands.

At the start of each round all participating players must decide whether to bet on the banker hand to win, the player hand to win. or on a tie. That’s the only decision that needs to be made, because all subsequent actions follow a fixed set of rules. At the end of the round the winning hand is the one which is closest in value to nine.

In baccarat, all cards are worth their face value apart from tens and picture cards. They are worth zero. So a hand consisting of an ace, a three, and a queen would have a value of four (1 + 3 + 0). If the value of a hand is equal to ten or higher, then only the second digit of the value counts. So a hand consisting of a six, a five, and a four would have a value of five. The total value is 15, but the 1 is ignored.

Whether or not the banker hand is dealt a third card depends on a fairly complicated set of specified rules. We’ve outlined these rules below for informational purposes, but you don’t actually need to learn them in order to play baccarat. The dealer will automatically deal according to the rules and you don’t need to do anything.

There’s basically no skill involved in this game at all, it’s pure chance. The only decision you have to make is which hand to bet on, or whether to bet on the tie. There’s therefore not really any strategy involved. It’s just simple mathematics as to which bet represents the best value, and that’s a bet on the banker hand.

Although you have to pay a 5% commission on winning wagers, betting on the banker hand is still the best bet from a mathematical point of view. This is because the banker hand is marginally more likely to win than the player hand. There’s not much of a difference though, and betting on the player hand doesn’t represent much less value. The only bad bet is on the tie, because in spite of the 8:1 payout the house edge is largest on this wager.

We’ve ranked the best online casinos for playing baccarat and listed them below. These are all reputable and trustworthy casinos that perform well in all the key areas. You can play a variety of different games at all of them, but they are particularly good options if baccarat is your preferred game.