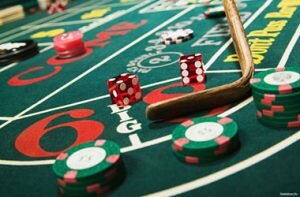 Whilst you can of course play many online Roulette games completely free of charge, there is no greater thrill in the world than playing Roulette for real money.

Placing your wagers on the Roulette table then watching as one of those wagers turns out to be a winning one as the ball lands in one of the number wells is way to appealing for many players, and in this article we shall give you a few pointers in regards to which Roulette games are available online and which ones are well worth you settling down to play.

Craps is a dice game which can be found in most casinos around the world and on the web. It’s particularly popular in American casinos, where you’ll typically find several craps tables on the gaming floor. You will often see these tables surrounded by lots of people, all betting on the roll of a dice. There’s usually a real sense of camaraderie amongst the players as they are frequently all rooting for the same outcome.

People often consider craps to be a game for high rollers only, which is really not the case. While it’s certainly a favorite for many high stakes players, it’s actually suitable for all players no matter what stakes they play for. It can be a confusing game for beginners, because there are a lot of different bets that can be placed. However, the basics of the game are relatively straightforward to learn, and it’s quite possible to play without knowing each and every possible bet.

In this craps guide we’ll teach you what you need to know about the game, including how to play and all the types of wagers you can place. Please see below for all the articles included in this guide, with more information on each of them. We’ve also provided a brief history of the game.

How To Play Craps

The basic concept of craps is that you bet on the outcome of two dice being rolled by one player. This player is known as the shooter. Although that is essentially all there is to it, there are a few rules that complicate things a little bit. There are also several different types of wager you can make.

Overall the game is really not that difficult to learn, but it’s important that you understand the rules before playing. You should also be familiar with at least the main types of bets.

Craps is a game of pure chance and there’s no real strategy involved. There’s also no way for you to affect the outcome of a roll of dice, so it’s really just a case of making your bets and hoping you get lucky. With that being said, there are a few things that you can do to improve your chances of winning, or at least make your money last longer.

We’ve provided some advice for playing craps which should help you get the most out of playing the game. We have also covered the table etiquette that you need to know if you are going to be playing in a live casino.

Playing craps in a land based casino can be quite a daunting experience, particularly if you’re surrounded by players that all know what they are doing when you don’t. If you are playing for the first time, then you might want to consider using an online casino. This is a much easier (and less intimidating) way to learn the game, as you can play at your own pace and without any pressure. You can even play for free at most online casinos if you want to.

There are several other advantages to playing online, and one that particularly stands out is that you can play whenever you want. You can also benefit from the bonuses and rewards that online casinos offer their customers. Please note, though, that it’s important to use a reputable and quality casino.

There’s a lot of slang and other lingo used at a craps table. If you want to know what everyone is talking about when you’re playing in a live casino, it’s a good idea to learn the relevant terms. You can find them all in our craps glossary, along with an explanation of what they mean.

There are a few theories about the origins of craps. An early version of the game can be dated back as far as the Roman Empire, but it’s generally accepted that craps as we know it today descended from an English game called hazard. This game was invented during the Crusades as a way for the knights to pass time between battles.

Hazard went on to become popular in English gambling houses, and then spread to France. The game then made its way across the Atlantic Ocean to America. Some believe the French are responsible for this, while others believe it was introduced to the region by early English settlers.

Regardless of how the game actually came to America, it was soon a firm favorite among gamblers. It spread throughout the country thanks largely to its popularity aboard the steamboat casinos which traveled along the Mississippi River. In the early 20th century the game was somewhat revolutionized by John H. Winn.

Winn solved some of the flaws of the game with a new betting system, which included the don’t pass bet, and improved the layout on the game board. The changes that he introduced are still used today and Winn is known in gambling history as the father of modern day craps.